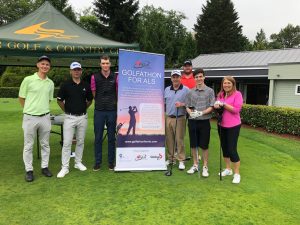 On June 26th, Seymour’s head golf pro was joined by several others in golfing a total of over 144 holes.

“I started my day with a 3:30 alarm call and teed it up Thursday morning at 4:50 with one of my Associate Professionals, Lenny Cyr (Lenny played the first three rounds with me) and was later joined by Seymour Professionals, Trevor, Connor and Lindy throughout the day.”

Playing a total of five rounds, Schienbein scored an average of 77, making seven birdies and one eagle. Cyr played 54 holes and had 14 birdies.

“I enjoyed all the rounds but the third one was a special one as my son joined Lindy, Trevor and I and we had a great round,” says Schienbein. “Sam hadn’t played since last year and while he loves the game, hasn’t had a chance to play much over the past year.  He was super nervous and started out his round with a birdie on the first hole beating my par! The rest of the day was enjoyable for all of us and certainly reinforced with me that this game is so much more about the people you are playing with versus just the score!”

“I am very proud to report that through your support we were able to raise a new record $31,105.00 (and pledges are still coming in) for the ALS Society of BC.  Over the past 14 years, Seymour continues to lead the Province raising over $326,000 for the ALS Society!”