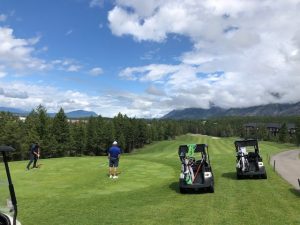 Other stats from their Golfathon include:

“We persevered through two separate Thunder and Lightning storm delays that took away approximately 5 hours of golfing time, but we managed to still play for 13 hours of golf!” says Scott McClain, Head Golf Professional. “Copper Point Golf Club’s PGA of BC professionals remain committed to raising funds and awareness for the ALS Society of BC through the PGA of BC Golfathon for ALS.”