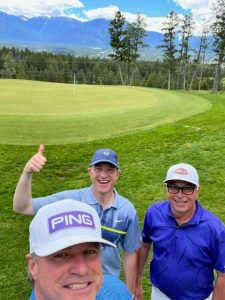 On June 22, Brian Schaal, Scott McClain, Dennis Bradley, & Dale Moore started their day at 4:50AM and finishing at 10:35PM, golfing a total of 632 holes collectively. The highlight of their day was the many groups and people who were cheering them on and who were thankful for their efforts, as more and more people know someone who is affected with ALS.

Comments from the golfers – We continue to raise awareness and funds for patients and their families living with ALS.  We hope that we won’t need to do our annual golfathon in the near future because that will mean that we have found a cure. Thank you to all who have supported us and PGA of BC professionals province wide.

Amyotrophic Lateral Sclerosis (ALS), also referred to as Lou Gehrig’s Disease, is a fatal neurodegenerative disorder that affects the person’s motor neurons that carry messages to the muscles resulting in weakness and wasting in arms, legs, mouth, throat and elsewhere; typically, the person is immobilized within two to five years of the initial diagnosis. There is no known cause or cure yet, but there is hope through the ALS Society of BC.